a presentation to CM410 class
Hi.

I'm Tom Veatch, plumber, PhD, ping-pong club president. I have many interests but I have one actual job, which is plumbing.

Plumbing and pipefitting is a wide-ranging field including not just drinking water systems and water heaters, but medical gas systems like hospital room oxygen and vacuum lines, drainage of all kinds, core systems in kitchens and bathrooms; also it includes hydronics, radiant heating, many industrial processes, steam systems and boilers, petroleum refineries, and the core workings of nuclear power plants.

These systems are all about using energy, and creating it. Indeed, our expertise is all about energy.

Global Warming and Oilfields Exhaustion are making energy -- green energy -- very important again. Energy should be carbon neutral and renewable, and mostly it's not.

Plumbers are in the building business, and buildings do maybe 40% of all human energy consumption.

Fortunately, economies are very easily achievable within buildings, unlike with cars or even industry. The pipe trades are in a key place of leverage to influence the process of global warming and the inevitable but slow transition to renewable energy.

So as builders, we are, and ought to be, keeping an eye on the best practices and new technologies that can make things better. And my own work life is now all about making building systems that are energy efficient, cost-effective, and hopefully that help save the planet.

Electricity, you might think, is the biggest energy drain, and it is indeed an enormous area of potential progress in green energy.

However, consider these facts about solar electricity generation, or photovoltaics:

These facts suggest that the place to focus our attention is water heating rather than electricity generation. We ought to find a bigger bang for the buck in the hot water cycle.

Plumbers' Cooperative is a small mechanical company I helped start in order to make money by doing good. Our specialization in plumbing and pipe trades represents the mechanical part of building construction, which creates and conducts most of the major energy flows in buildings.

Although buildings use energy for many things, heating water is the biggest.

So I'd like to share what I've discovered about cutting energy usage in heating water, which according to my findings is the best way that the building construction industry can contribute.

Many have shared these lofty goals, but so far in most areas, the results are pretty humbling.

First we see a passive solar water heater, suitable for a hiker's cabin. 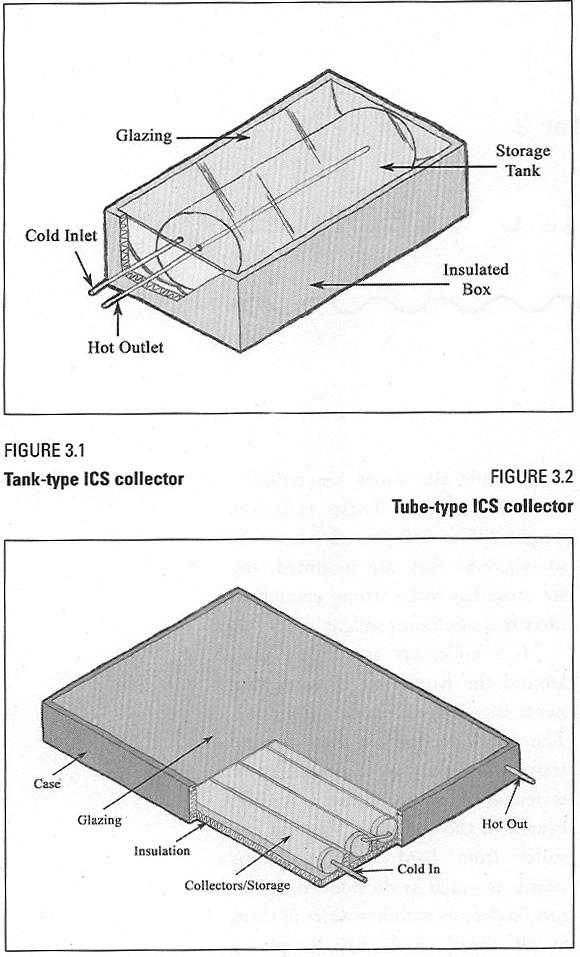 Above is simple tube system.
Below is a flate plate collector, which was most successful for residential water heating applications until a few years ago. 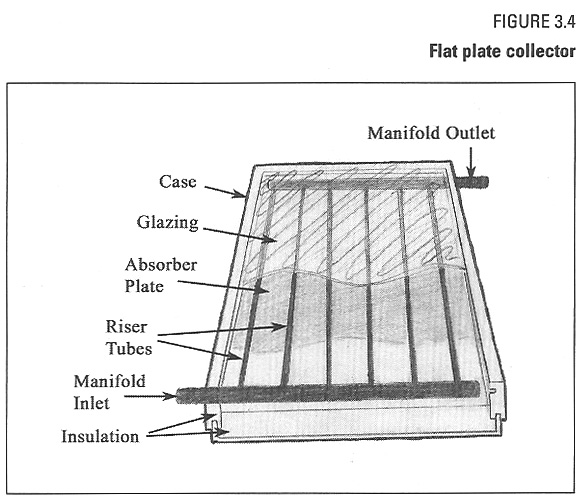 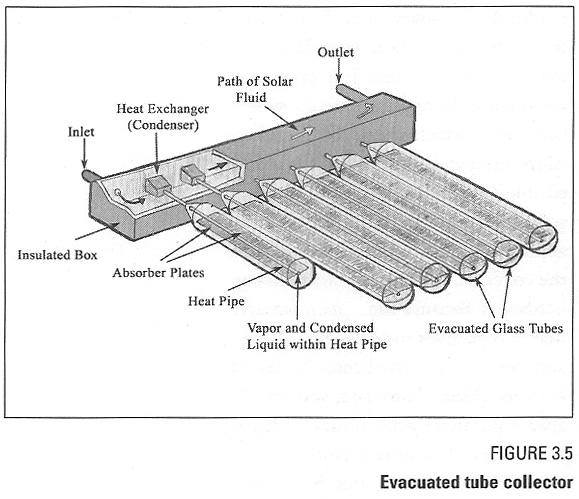 This last one is the newest and most efficient system. I'll tell you more about it.

These tubes are called heat pipes.

Heat pipes were invented in 1963 at Los Alamos as a space technology, to heat-balance slowly-spinning satellites.

With a heat pipe, one end is stuck down in a hot place, the other is up in a cold place.

This process can go pretty fast if necessary. A special heat pipe at Los Alamos vaporizes lithium, which is a normally a whitish kind of metal, and that heat pipe moves heat faster than the surface of the sun.

Heat pipes are used to keep the hot side of satellites cool and vice versa, to cool computer chips, and for solar water heating too.

In the solar water heating application there are two tubes, the inner one has the liquid and the wick of porous ribbon, and the outer one has a deep vacuum. These aren't going to be that hard to make: as you know, fluorescent light bulbs have similar properties and they come pretty cheap.

The ribbon has a certain type of color on it, which is absorbent to solar radiation, but non-radiating of infrared which is the wavelength that hot materials use to dump out heat through light radiation. So the light energy comes in but doesn't go out.

The vacuum keeps the heat from leaving through molecules bumping around, which means it works in outer space, Antarctica, Africa, and everywhere in between, including Seattle.

So this is a pretty amazing and cool trick. As it turns out this is the highest efficiency solar energy collection method ever invented. And yes, it works, no matter the outside temperature. Even when it's cloudy and very little energy comes in or out, it still works because the liquid is still right at boiling temperature there inside the inner tube inside the thermos bottle of the outer tube, and every bit of energy that does come into it does get captured and transferred. So it's super efficient for environments like ours.

A number of manufacturer's websites discuss this great technology, and I myself have given presentations on it at the University of Washington.

The Solar Ratings Corporation provides actual numbers of kilowatt hours saved per year for all kinds of systems.

The top performing commercially available system for the Seattle area, according to the independent Solar Rating and Certification Corporation, is the ThermoMax "Mazdon 90-R80" system (90 tubes, 80 gallon tank), which saves an estimated 3100kWhr/year of electricity, based on Seattle ground water temperatures, latitude, and weather.

These numbers are discouranging. I probably won't make that investment; neither will most of my customers. So I can't actually report to you that everyone should go out and spec these in every building and save the planet with them right away.

On the other hand, in China they are selling for $190 per installation, and they have 30 million units installed, so maybe we just have to get the price down over here too and it'll all be gangbusters.

Look at this for an idea of the Chinese market.

So keep your eyes on this market, and be ready to make an investment when the price drops.

Although evacuated tube heat pipes may not pay as much money as we may have hoped, there are some other things to do for your hot water systems, which pay off very quickly.

Some super low tech stuff. These are big winners. Do them!

Let's look in more detail at the last of these. 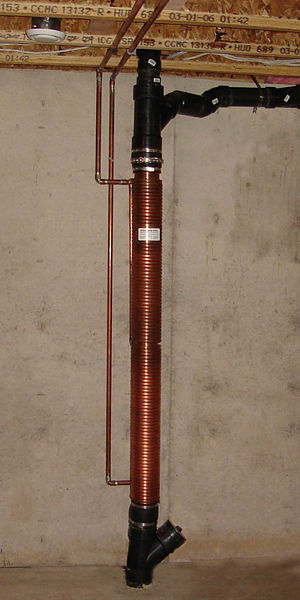 I want you to take away a sense of excitement about drainwater heat exchangers.

70% of the heat goes down the shower drain, right? So these capture a big chunk of that, maybe a third or two thirds. They might cost $500 or $1000, and are a lot easier for new construction but supposedly only a half day remodel job for a plumber. And they give you a $100-$200 per year savings, based pretty much on dishwasher and shower outflows.

If you have a restaurant or laundry where you use a lot of hot water, and it's just going out the drain, these often pay off in about four months.

So the drainwater heat exchanger is indeed something that you should spec into all your buildings, new or old, and it'll start saving big money right away and forever after. And it doesn't matter whether you're in Sunny Florida or Cloudy Seattle, it's your own used hot water that's doing the heating, irrespective of cloud cover or outside temperature. Of all green energy retrofits, this is the most practical, the most money-making, and the easiest way to have a major impact on your energy bills. This is something you can carry away. So call your plumber, and get one installed as soon as possible.

And finally, since I'm the president and coach down at Green Lake for the ping pong club, and it's my job to invite people in, I invite you one and all to come play with us.