inspired by Paul Klee
I feel connected to the great Paul Klee, not just for his openness, curiosity, and his art on our wall growing up: Senecio. 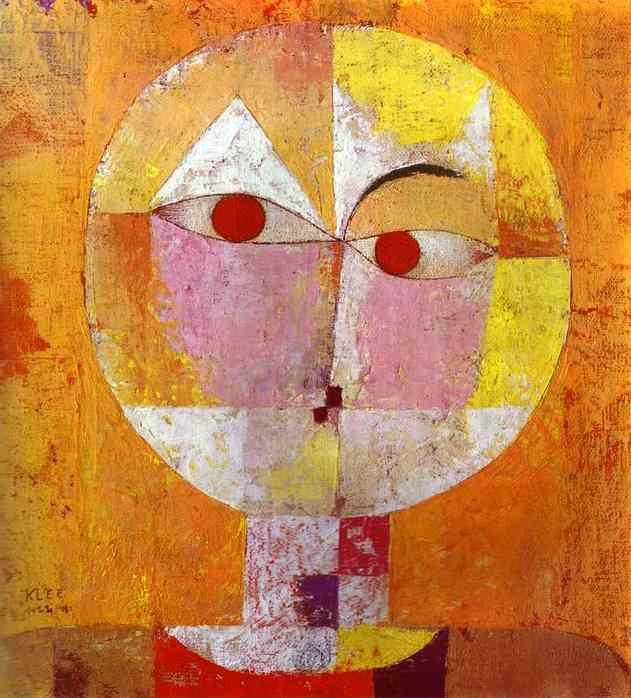 ... a circle on a grid, each random grid area gifted by Klee with some minimal representation for that part. A slant of cheekbone, a square of shadow, no more than hints. It is a jumble of parts, making no whole. Klee knew it, calling it "Senecio", "Head of a man going senile". Senility: inability to put one's parts together into an intentional whole.

As a youth Skukalski stared long at the sun, causing permanent center-retina damage, disabling him from seeing the center, forcing him to see only the edges: only the whole and never the part. This is the secret to his art, in which everything contributes to the whole, never is he captured by a part, which the whole of art constantly suffers from. Even in Michelangelo's Moses, or his Pieta, among the greatest works of a European millenium of art, the majority of the work is draperies contributing mere and meaningless scenery to the poignancy or understanding of the whole, demonstrating skill-validation rather than artistic import. In contrast no corner of Szukalski's work lacks an integration with and contribution to the point of the whole work.

Although Mom bequeathed me Klee, with Senecio always on our wall at home, and although I love his intense creativity and openness, I reject the parts-ness of him, and of his generation of pointillists and abstractors, which reveals reductionism into aspects while losing so much wholeness. Where they succeed it is in wholes, not parts. A Picasso expression of much with little, but all of it together, is what aims back at the center of motivation, the central place.

The wholeness reveals itself at a (whole) glance.

Outside the realms of human-concocted (i.e., weakly, poorly-captured, noise-filled, barely-seen) classical artistry, any organically governed moment reveals wholeness, with all aspects tied together, integrated by and subjugated to, and to the viewer, expressive of, the motivation of that moment's depiction. A random moment from a random video shows (and since random, likely unbiased, as though any moment of life will show the same) our two cats, playful and defensive, expressing their separate and joint motivations each as a whole. The defender's body back-lean, forepaw reach distance and swipe velocity, tail and paw balance, chest tension, eye squint, ear retraction, head-position, and back against wall, all express and contribute to the same motivated presentation: defense. The opposing player's near distance, body verticality, arm retraction, fingertip-only reach, even its towel-padded comfort, all express and contribute to the same motivated presentation: play. 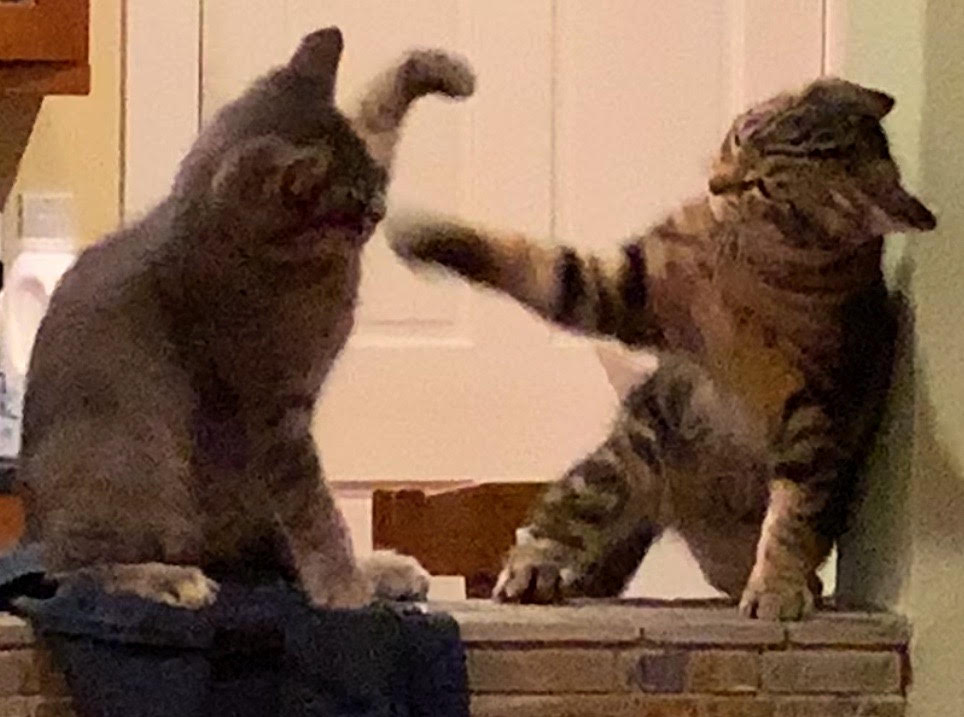 The integrating center of motivation, a.k.a. Self,, is constrained, by having survived over evolutionary time, to succeed even on its thinnest manageable edge of disaster, destruction, or death, surely even then, and how else to achieve that but to prioritize correctly, that is compatibly with survival, and somehow be able to throw all one’s resources at the highest priority, down to the level of the biochemistry and up to the level of the highest functional abstraction, for without these an eventual razor’s edge, shaving a barely achieved survival, will cut deeper and in general kill. In short this is the wholeness of the whole, the integration of many powers into a functional whole, a symphony of options taken at the right time to the right degree in response to each kind of survivable threat, even the direst.

The wholeness of the organismal outcome after the accumulated challenges of evolutionary time, will filter out, each one as a whole, the ones that haven’t got their stuff together as a whole. If a type of beast evolves a new capacity but hasn’t prioritized it and integrated it within its whole response pattern, the capacity won't help when the razor cuts. (The ones that are left, then, assuming such shaves have indeed tidied up the species, are capacities that have helped, or have not hindered. It is a pat statement of the underlying idea, a sort of double-negative argument: if not, then not.) Thus evolution’s priority is not just the creation of powers but the organism’s prioritization and integration of those powers. They must join and balance well enough to survive and reproduce, well enough to pass the Darwinian filter as an organismal whole.

Working on a generalized muscle fiber, as a computerized parameterized unit, in the form of a function in code, I found an example drawn just as I would in Paul Klee's Pedagogical Studies book for art students. What a connection! Seeking further, I came across some mad words of Paul Klee, about the heart of creation, which evokes my own goal. May we may strip the human agency and painterliness out of what he says about art, here?:

“From type to prototype. Presumptuous is the artist who does not follow his road through to the end. But chosen are those artists who penetrate to the region of that secret place where primeval power nurtures all evolution. There, where the power-house of all time and space - call it brain or heart of creation - activates every function; who is the artist who would not dwell there? In the womb of nature, at the source of creation, where the secret key to all lies guarded. But not all can enter. Each should follow where the pulse of his own heart leads. So, in their time, the Impressionists - our opposites of yesterday - had every right to dwell within the matted undergrowth of everyday vision. But our pounding heart drives us down, deep down to the source of all. What springs from this source, whatever it may be called, dream, idea or phantasy-must be taken seriously only if it unites with the proper creative means to form a work of art [I say, a lasting form of life]. Then those curiosities become realities - realities of art which help to lift life out of its mediocrity. For not only do they, to some extent, add more spirit to the seen, but they also make secret visions visible." (Klee quotations, 1924)

That birthing and rotting flesh which has survived and reproduced, has harnessed miraculous luck and history of energy, has conquered the bitter logic of unending time by its own evolution, has embodied the primeval power, which is the energy and the constraint of life itself. It does not exist as one thing, but as the universal living fact of it as evolution in all its temporarily successful forms continues unending. Evolution and art contain these parallel lines, so much that it may be the highest aim for art to imitate life, or a high understanding of life to consider it as art, filtered on wholeness.

The student artist learns, tries, to draw a line, a fiber, a muscle, knuckle, or eye. (Evidence of how difficult that is, or incompetent I am, abounds in this directory.) Great technical skill comes before even a part signifies as what it may be. A higher level of skill has a vision of the whole with an intent communicated by the parts. Best: all the parts together. Yet the evolved kittens in their safely-acquired sibling relationship and their frames of motivated action atop forests of trees of capabilities aligned for their shifting momentary purposes, achieve this pinnacle of integration in every moment. Such is the art of life.

"What is successful art?", Liz asked. Art will be lasting if future generations appreciate it. If I recall, T.S. Eliot said, bound by his time and scholarliness to a theme of modernity and progress, that current work lives in its tradition and should be informed by, and in conversation with, its historical precedents. But the eventual result of that heaped-up, stultifying academicity is an ever-increasing burden of technical education for those who might merely hope to appreciate a piece of artistic creation. Some day after a historical discontinuity (such as we undergo in the present day, so perhaps already), for most, such burdens will be cast off, and only a few, if any, specialists, will be able to appreciate that "modern", tradition-bound, educatedly-creative advance, which is bowed so deeply under its weight of history that noone can appreciate it who is not a historian, or a bone-sniffing archeologist.

A work will live, on the other hand, if it continues to be appreciated by those without a technical education in appreciating it. We find academic modern music has that quality: inaccessibility. I don't know anyone that knows anyone that can appreciate it. Therefore I say, inaccessibility implies historical evanescence. It will last if the future can access it, with or without a long apprenticeship to put it in a historical context. For this reason, I am persuaded that abstract and modern art will not last. Without the uneducated eye being emotionally captured, there will ultimately be none to preserve it, and no value retained. Art from then, that aimed for the living now, and not the now-dead, will in future be kept alive. And what did not, will not.